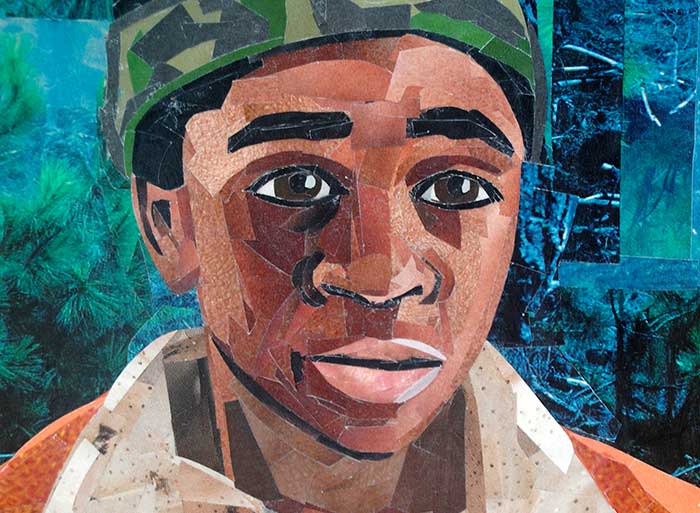 I had so much fun working on this portrait of Lucas Sinclair (played by Caleb McLaughlin) that was inspired by the series, Stranger Things. This is the third collage I’ve completed in a series of portraits inspired by the show. While working on this piece, I ended up reworking his jacket so it would have more texture in it instead of consisting of only solid shapes of color.

I also managed to complete this portrait within a few days. The overall composition came together quickly, which is not always the case with my portraits. The piece I did of Eddie Munson was actually more of a struggle, while that wasn’t really the case with this one. 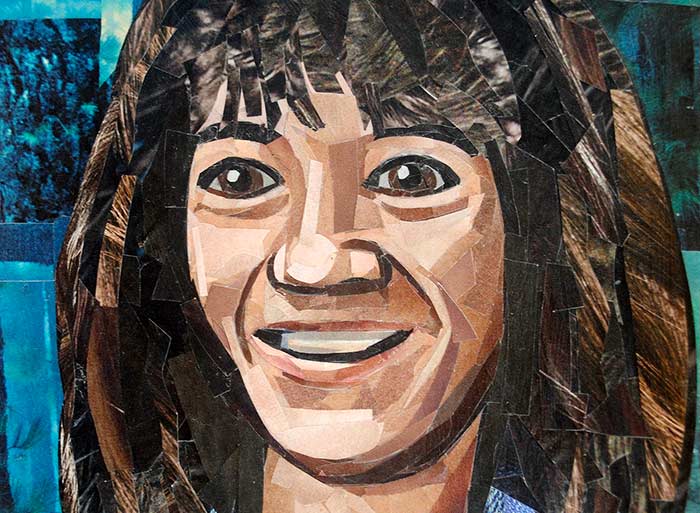 Portraiture is definitely a challenge for me, but I’m having a ton of fun working with improving on it. This piece is the second portrait I’ve completed in my “Stranger Things” series, and “Eddie Munson” was a top request that I received from my followers online. I’m looking forward to working on the other characters in the future. I also figured working on this series during the fall was very fitting with Halloween coming up.

Again, I wanted the background to look dark and reminiscent of the Upside Down, and again I used fragments from images of jeans for Eddie’s jean jacket (similar to what I did for the portrait of Eleven). For his hair, I used fragments of images of hair in magazines. This portrait took a little more time than the portrait of Eleven since I was really focused on getting all the shadows and highlights down properly. 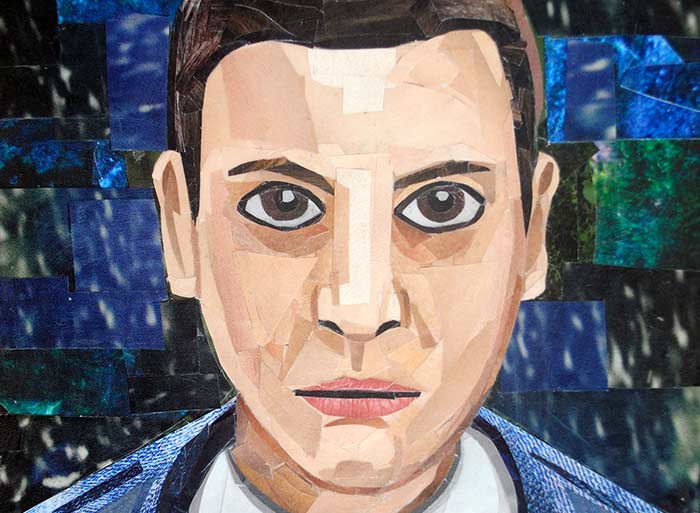 “Eleven” is a portrait that I completed a few weeks ago right after I binge-watched the fourth season of Stranger Things. If you aren’t familiar with the show, Eleven is one of the main characters and I wanted her to be the first portrait completed in this series. Then I continued to work on finishing up my Schitt’s Creek series before I wanted to revisit this series to work on more characters. This particular piece was completed over a weekend, and I wanted the background to be somewhat reminiscent of the Upside Down. I also cut up images of jeans for her jean jacket.

And stay tuned, I’ll have more portraits of characters from this show being posted soon. Again, portraiture is definitely a struggle for me, but hopefully the more I make them, the easier they’ll get. 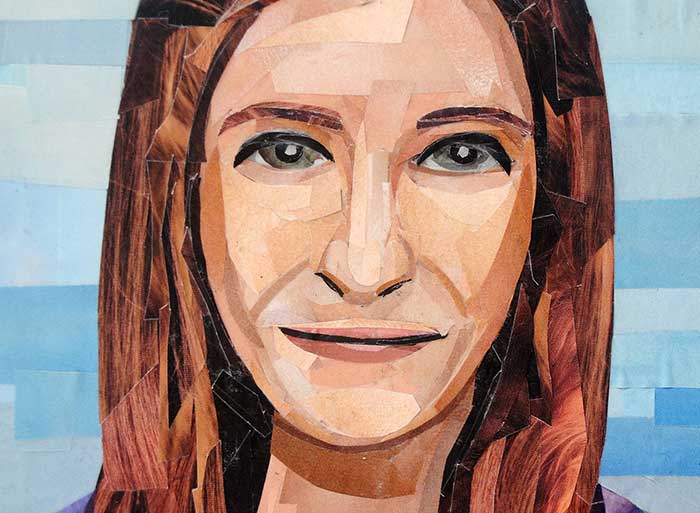 The other night, I finished the eighth portrait in my Schitt’s Creek portrait series. This will be my final portrait for now, however, I may revisit the series in the future to add a few more characters. For the last piece, I figured I’d tackle a portrait of Twyla so I’d have a portrait of each of the Levy’s that starred in the show.

So, what’s next? I’m planning to work on another series inspired by another favorite TV show of mine. So stay tuned for some more portraiture 🙂 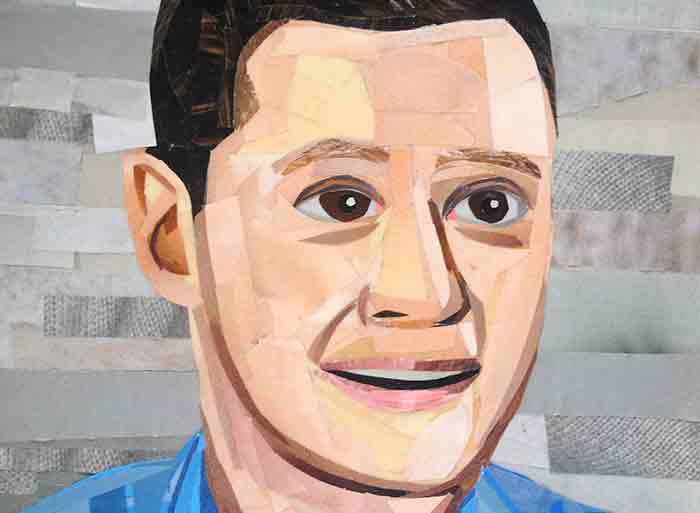 I only have one more portrait to go (for now) in my Schitt’s Creek series. Working on Patrick Brewer’s portrait was a lot of fun. I did a little bit of live streaming for this piece, but for the most part tried to work on it here and there. I ended up using more solid colors than I expected to, but that’s just how my process goes sometimes. Sometimes, my work seems to have a mind of its own…

In other news, I may be a little slow to create new art in the upcoming weeks. I’ve been going through a couple of personal issues right now, so I may need to dedicate a little more time than usual to self care and a different sort of routine. But don’t worry, I’ll be back at being an art-making machine soon enough 🙂 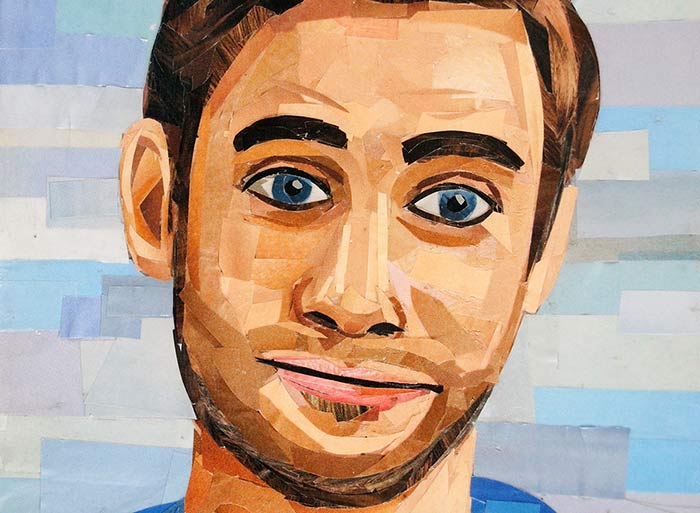 And the sixth portrait in my Schitt’s Creek series is complete. I have two more portraits that I want to complete for this series before I shift to another portrait series, but I may revisit Schitt’s Creek again to make collages of more characters at a future time.

This piece was a bit of a struggle for me. I thought I was getting the hang of portraiture again after being rusty for a while, but I kept struggling with getting the shaping down right. Also, his facial hair changed a few times before I was able to get it in a good place. Sometimes the creative process can take a while… 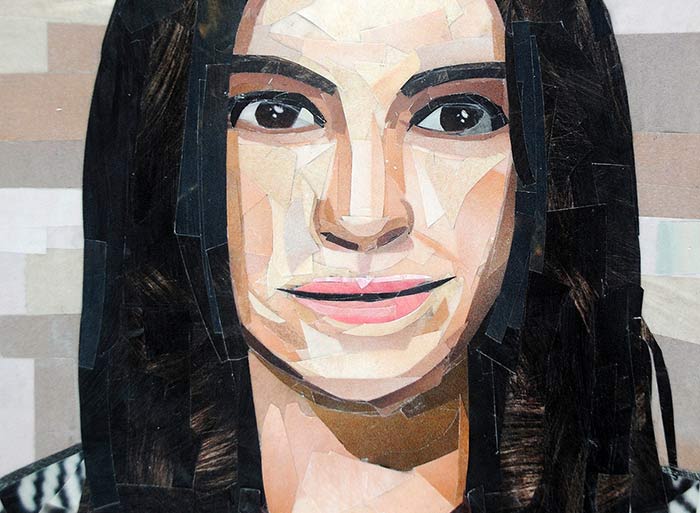 The fifth portrait in my Schitt’s Creek series is now complete. In this picture, Stevie’s shirt looks a little more neutral than the actual piece looks like in real life – it’s actually a little redder. And when I started off with this portrait, my sketch was pretty rough, so I had to work on reshaping a lot of Stevie’s features with magazine cutouts to get things looking the way I wanted them to.

I’m excited to continue this series with about three more portraits. It’s been fun diving back into portraiture and exploring getting the likeness of different figures. It’s been challenging, but it’s also been a lot of fun. 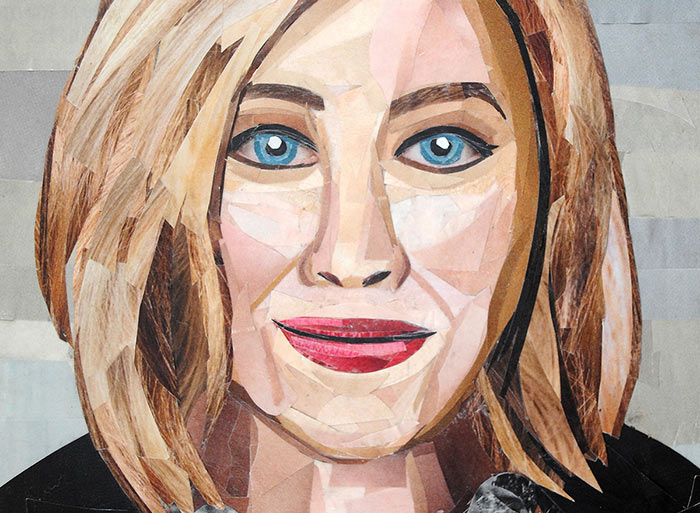 This Schitt’s Creek portrait series is really demonstrating how the more you practice something, the better you get. I was feeling really rusty when I tackled the first portrait, and now on the fourth one, I’m really happy with the result. It’s still taking me quite a bit of time to complete these, but I’m happier that I’m feeling more confident with getting the likeness of the characters down properly.

I think I’ll make at least two more collages for this series. I may make four more, but I don’t want to get ahead of myself. Once I’m finished with the Schitt’s Creek portraits, I’m planning to tackle a New Girl series. 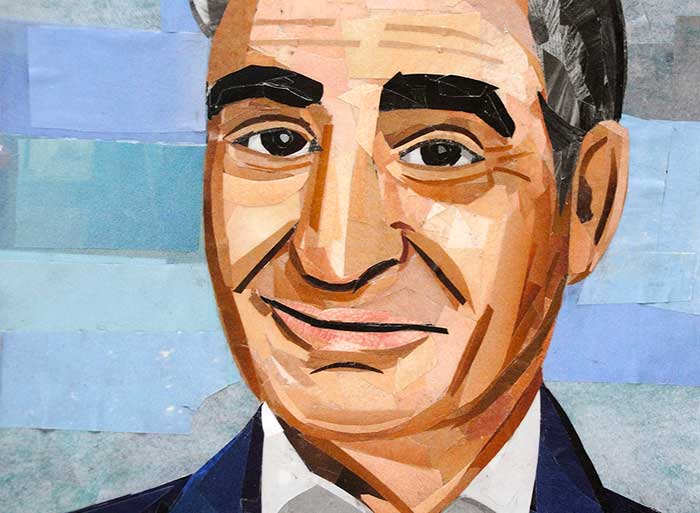 This is the third collage I’ve completed thus far for my Schitt’s Creek portrait series. I’m beginning to get a little more comfortable with portraiture again, but it will probably take several more portraits before I feel more at home with it. I’m planning to tackle at least three more collages for this series before I turn to a different character series.

Getting back into portraiture after spending years away from it has definitely been a challenge, but I’m liking the routine I’ve gotten into. As an artist, I think it’s important to find different ways to challenge yourself, let that be via unfamiliar mediums or subject matter. I think after I complete several new portraits, I’ll start to revisit still life and landscape pieces. 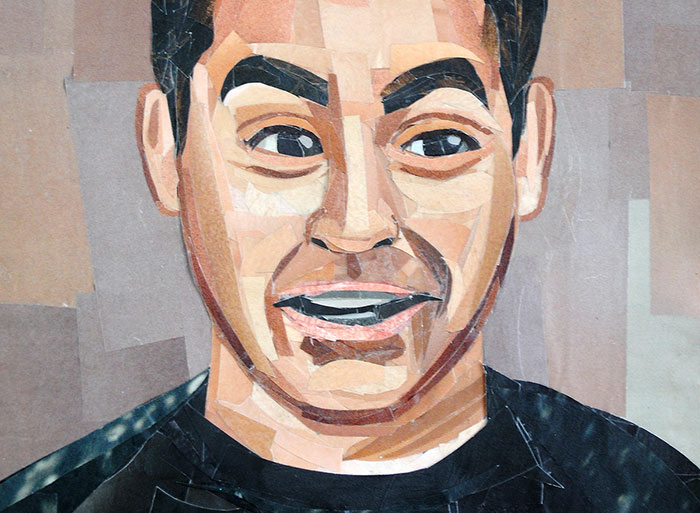 Life has been hectic lately – I’ve shifted my focus on some of my other interests, so I haven’t been as active with my art-making. I picked up running recently, and have spent a great deal of time training for upcoming races.

However, I’m still planning to at least make one new collage per month this year. I completed this piece just the other night. It’s inspired by the show Schitt’s Creek, and I’m hoping to do more portraits of other characters soon. I started off with a portrait of David since he’s one of my favorite’s on the show. This portrait was definitely a bit of a struggle, and if you were to see it in-person, you’d notice that some sections have been built up with more layers than others. That’s a common occurrence when I’m struggling with a particular subject matter.

The tricky thing about making a portrait of a well known figure, is that it’s very easy to screw up the details and have the portrait not actually look like the person it’s supposed to be. I’m hoping that by picking up portraiture again, this process can only get easier over time.