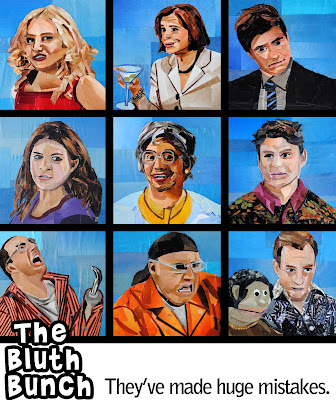 I like to think of the Bluth family as a dysfunctional version of the Brady Bunch.

Arrested Development was a TV show that aired from 2003 until 2006, and it follows the story of a dysfunctional family. The show is going to be back for another season, and the above collage is my submission for the Arrested Development and Netflix contest.

The Concept
I wanted to make a collage portrait of one of the Bluths but couldn’t decide which one. So I thought it would be better to make a collage that included all the main characters. I wanted to find a creative way to incorporate all the portraits, to tie them all together. I thought about how many main characters there are. Then I thought, “there’s a bunch of them, sort of like the Brady Bunch.” When I remembered Tobias’ character Mrs. Featherbottom, I realized Arrested Developement had their own bizarro Alice. So I had to go ahead with the idea…

The Bluth portraits would be reminiscent of the Brady Bunch opening credits that include blue squares with video portraits of each family member. My collage would mimic the Bradys so the Bluths would look like portraits of a Brady Bunch gone wrong – the complete opposite of the memorable wholesome family from the 70s.
Placement of Characters
Since the Bluths consist of four kids and two grandkids, with only three women, the arrangement would be slightly different than the Bradys. Mrs. Featherbottom would obviously go in Alice’s position in the center. Lucille would go above Mrs. Featherbottom while George Senior would go below. The first row would be arranged just like the Brady’s by including the mother and the oldest son and daughter. To the left of Lucille would be Lindsay and to her right would be Michael. Maeby would go below Lindsay to follow the Brady’s model of having all women in the first column, and also since she’s Lindsay and Tobias’ (aka Mrs. Featherbottom) daughter, she would be closer to their portraits. Plus her facial expression works well next to Tobias. George Michael would be below his father Michael, but above his uncle Gob. This is so George Michael would be near his father and in the all-male Brady column. He’s above Gob since he definitely the more mature of the two. Since there aren’t as many women as there are men, in Cindy’s space is Buster’s portrait. I thought this was very fitting since Cindy had a lisp and Buster has a very distinct voice.

The Process
I cut out nine 5″x5″ squares of watercolor paper. Each square was used as the support for each collage portrait, where I used my “painting with paper” technique. With separate squares the composition can now always be rearranged for fun: 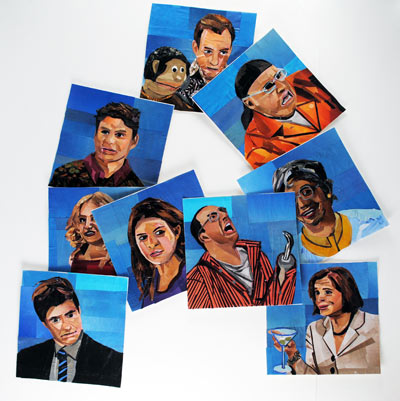 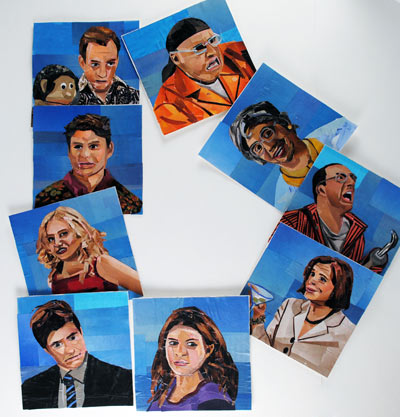 The portraits can also come apart and be viewed as separate works of art or put together to form one large work of art.

This idea came to me a few days ago so I only had this past weekend to complete the piece. It usually takes me about a day to complete my smallest portrait size. I don’t know how I managed to finish this before the deadline…