Zoos can remind us of our pets at home, although they are much different since zoo animals are wild animals. Pets are animals we get from pet stores and they include cats like tabby cats, dogs, hamsters, gerbils, and goldfish, just to name a few.

Can you tell which animals are pets and which ones belong in a zoo? Take a look at the images below. Each one is a collage made by Megan Coyle. Click on one of the smaller images below to viewer a larger image and discover if the animal belongs in the zoo.

Above there are images of several different species of animals. A species is a word we use to refer to groups of animals. For example, lions and walruses are two different kinds of species.

Have you visited the zoo before? What was it like? Which animals were living near each other? Zoos often have similar species live in the same building. The National Zoo in Washington, DC includes different animal groups like the Great Apes and Other Primates, Asia Trail, Birds, Reptiles and Amphibians, and Great Cats.

Try to think of other animals you can find at the zoo. Are they similar to any of the animals listed above? How are they different? 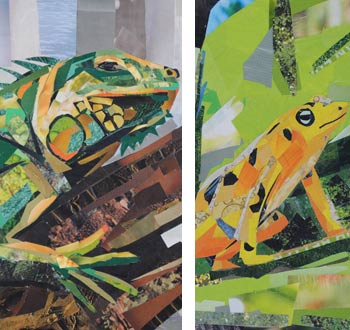